The Bitcoin white paper and code was written by Satoshi Nakamoto in 2008-09. It is a culmination of work over the last 40 years of cryptography, key signatures, digital cash, time-stamping, fault-tolerance, and distributed computing.

How is Bitcoin created?

Bitcoin is created through a process called ‘proof of work’ (aka mining). Participants (called miners) of the Bitcoin network protocol around the globe use computers to compete against each other to solve the next block ‘hash’ puzzle. The first computer to solve the hash of the block of transactions is rewarded with newly minted Bitcoin.

Why is Bitcoin so volatile?

Bitcoin and altcoin currencies are volatile because of the large amounts of fiat entering and exiting the system (buying and selling). A small circulating supply (low float) of Bitcoin on the market (<10+ million) coupled with high volume is more volatile. Conversely, a large circulating supply with the same volume would be less volatile.

What is a Bitcoin MEMPOOL?

The mempool is a group of unconfirmed Bitcoin transactions on the Bitcoin network. Once a Bitcoin transaction is verified by a node, it waits in the ‘memory pool’ until it is picked up by a miner and inserted into a block. For a more detailed explanation of the Mempool see: https://coinsutra.com/bitcoin-mempool/

How can I find out how busy the MEMPOOL is?

What is a full node?

A full node is a computer that has the entire database (ledger) for all the transaction history of a cryptocurrency.

What is the purpose of a Bitcoin miner?

A Bitcoin miners’ role is twofold: one is the solve the mathematical puzzles which are part of the process for generating new coins (proof of work) and the other is to confirm the transactions on the Bitcoin network.

Where’s my transaction and why is so slow? Can you speed it up somehow?

The Bitcoin network can handle 7 transactions per second. If the volume of transactions are high the transaction waits in the mempool until the next block is created. You can pay more higher fees for faster processing.

What’s the difference between OTC and online exchanges?

An OTC (Over the counter) exchange is a market of miners, brokers, and dealers to service high-volume traders, hedge funds, private wealth managers or high-net-worth individuals. An online exchange (centralized or decentralized) is a matching engine for traders who want to actively trade price movements, use trading bots, or trade for fiat accounts.

What’s the safest way to store my crypto?

Hardware wallets are like mini computers that secure cryptocurrencies in cold storage when disconnected and secured. layer of security and is good for beginners because everything is included in one package. It must be noted that a hardware wallet is a type of cold storage. You can also create your own hardware wallet with software using Veracrypt. It is not as user friendly but the only cost would be a USB stick.

A paper wallet is a piece of paper with your private keys or secret seed phrase. The

regenerate your software wallet. Note, a paper wallet has to be stored in a very safe place because anyone who can see it can steal it. Writing down your private key is subject to how handwriting errors and legibility. The handwriting may be difficult to read and thus render the private keys unusable.

What are best practices for making sure my hardware wallet or paper wallet storage is safe?

Try to practice regenerating a wallet on a different computer once you have saved your keys offline. It should be identical.

How can I undo a Bitcoin payment?

The short answer is you can’t. Please see FAQ on sending to the wrong address.

I sent my Bitcoin or cryptocurrency to the wrong address? Is there a recall button after I hit send?

In theory, no. If you know who the receiver is, you can ask the receiver to send it back at their discretion. However, if the address not confirmable, the coins may never be sent, so they may never leave the wallet to begin with.

This sounds scary, if I make a mistake sending I could lose my coins. Is this correct?

Yes this is correct. But you can practice and learn how to send and receive coins to build confidence and prevent mishaps from happening. Start with small amounts.

So, How can I practice sending and receiving coins?

What can I do to prevent errors in sending or receiving coins?

There are QR codes which are scanned with phone wallets to prevent copy/paste errors when sending coins.

Seed phrases can range from 12 to 25 words. They do not do anything on their own. However, if you lose or have a wallet stolen, seeds can recover a wallet. Your private key is transformed into a series of coded words to form a seed phrase.

I left my Bitcoin with a friend or on an exchange, is this safe?

No, “Not your keys, not your bitcoin”. So your coins are never really safe on an exchange. If you leave your coins with a friend, and they have the private key, they could spend your coins or they could lose them. The alternative are custodial wallets which store the private keys on the internet through a 3rd party. However there is potential danger with entrusting someone else to hold that information. “When bitcoin custodians encounter problems, the failure tends to be immediate and catastrophic” - Jameson Lopp https://blog.keys.casa/the-custodian-menace/

Why is it not safe to store my coins on an exchange?

If your coins are stored on an exchange, they could potentially be stolen if the exchange is hacked. Also most, if not all, centralized exchanges do not give you the private key to the Bitcoin or crypto wallet on the exchange. Which means you don’t have ultimate control of withdrawal or spending of your currency.

Why do cryptocurrencies have the reputation of being risky?

Aside from trading in high volatility market, there two major forms of risk which could cause you to lose your cryptocurrency.

Game theory in Bitcoin economics is a incentive to secure the proof-of-work network. Bitcoin mining is intentionally difficult and inefficient, thus making it costly for malicious actors to rewrite the ledger (blockchain).

What is a Decentralized Exchange? Why does it matter?

What some of the shortcomings/drawbacks of blockchain technology?

Who controls Bitcoin, and can they change it if they please?

No single person or entity controls Bitcoin. There is a distributed consensus model with protocols to improve the Bitcoin standard, called BIPs, but it is not governed by a single individual or entity. People may control addresses of large amounts of Bitcoin, but that does not mean they control the network layer.

How can Bitcoin be destroyed?

What are some current and future applications of cryptocurrencies and smart contracts?

Some applications of cryptocurrencies and smart contracts which are in early stage development include but are not limited to validation and verification of identity, supply chain consensus, anti-counterfeit measures, asset tracking, small to large scale crowd sourced fundraising (also known as ICOs), IOT (Internet of Things) and healthcare data tracking.

What’s the difference between Coins vs. Tokens?

Coins are cryptocurrencies with independent blockchains and network protocols (either copied, modified, or rewritten). Tokens are written on top of blockchains with differing use-cases. Tokens can be printed without needing mining and use the blockchain backbone as their transport layer.

What is a Smart Contract?

A smart contract is software program which is intended to automatically execute according to terms and events of the agreement. Similar to the if-then logic of a vending machine. Smart contracts were first proposed in the early 1990s by Nick Szabo, who coined the term, using it to refer to “a set of promises, specified in digital form, including protocols within which the parties perform on these promises”. 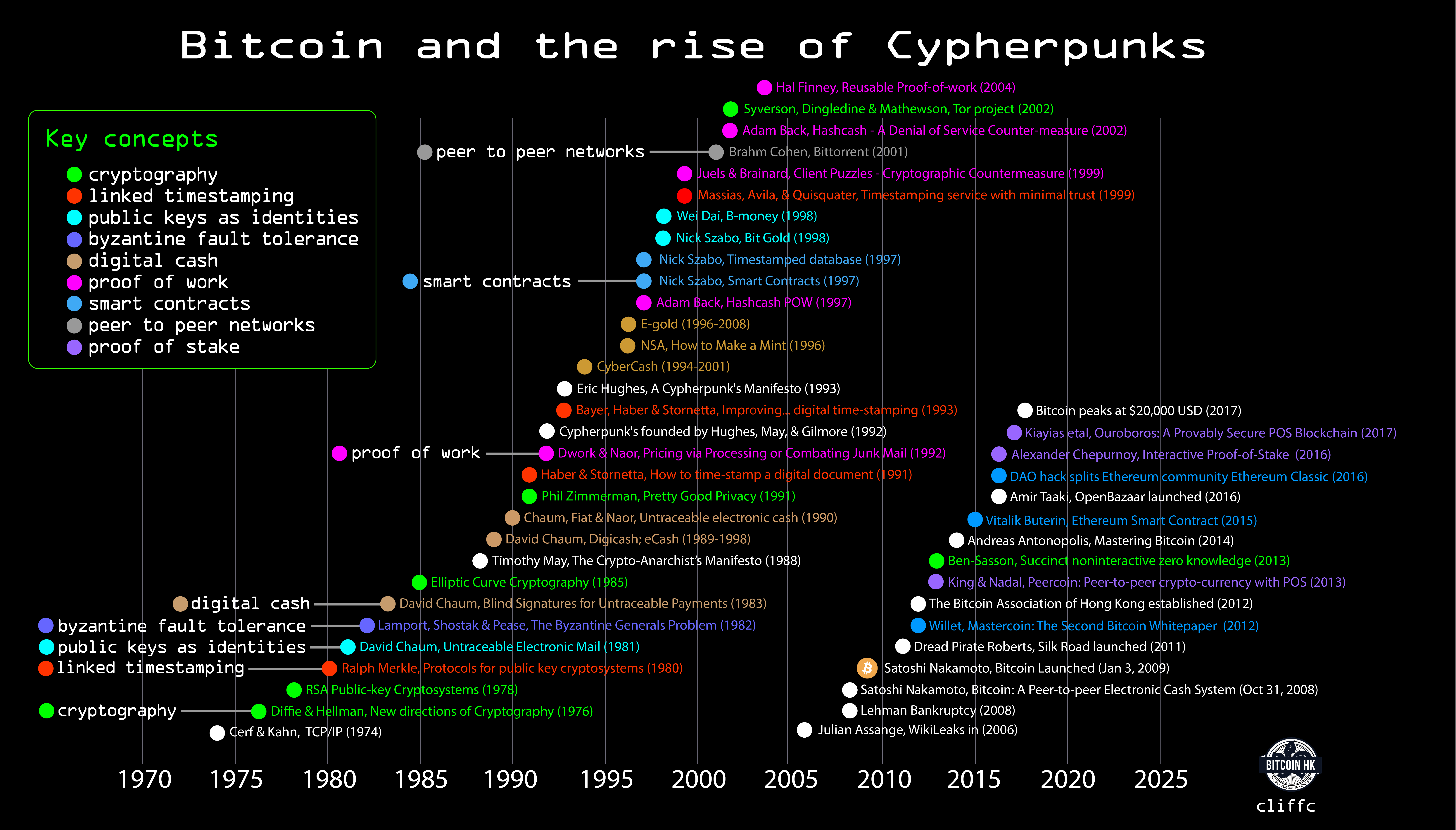